Joseph Prunty
Joseph works as an editor in one of the magazines dedicated to video games. Here, at RecRoomPick, he’s given the opportunity to enjoy the reverse of the medal – the no less engaging world of offline games.

Ryan Stephens
Ryan knows everything when it comes to gaming, both online and offline. Since his early years he’s been in love with arcades, air hockey, and foosball. Finally, he’s given the opportunity to share his knowledge and opinion on the hobby of his life (and even get paid for it!).

Rec Room Pick is reader-supported. We may earn a commission through products purchased using links on this page. Learn more about our process here

For anyone that just plays air hockey casually, it is a game of instincts. But for anybody that wants to play competitively they know that using the proper air hockey strategy is key to victory. But what exactly goes into finding the right strategy for your style of gameplay so that you can win as often as possible?

Quite a lot, actually! You need to have a great understanding of game fundamentals like posture and grip. From there, you need to know the tips and tricks of air hockey so that both your offensive and defensive game will allow you to excel in a match. While it might be hard to figure out where to start in unraveling this puzzle, don’t you worry about it! We are here to help so that you can win at air hockey more often than not.

Start with the right grip and posture 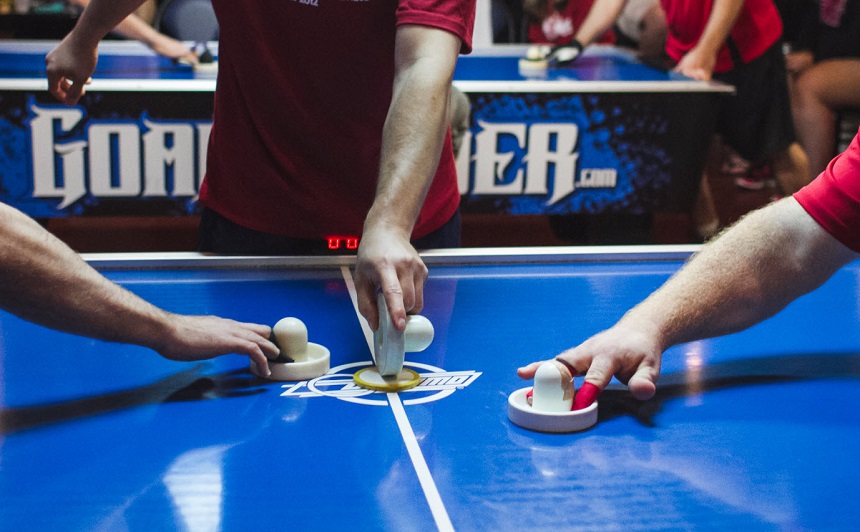 The first thing that you need to pay close attention to is how you are holding your striker Trusted Source Air hockey - Wikipedia A striker (sometimes called a goalie, mallet or paddle) consists of a simple handle attached to a flat surface that will usually lie flush with the surface of the table. en.wikipedia.org . Most players, especially those who have no idea what they are doing, will usually use their palm and grip the top with their entire hand. While this might seem like the most comfortable way to hold the paddle, it is also the most limiting.

Professional players and those who have more experience in the world of air hockey usually hold the paddle in one of two ways. They either place all of their fingers in the raised ring behind the center of the paddle or put two behind the middle with the index and ring on either side. Both of these grips give you better control of the paddle and allow for more flexibility in your wrist. This action will make it so you can hit harder and more accurate shots. It also has the added benefit of not letting your opponent know where you are going to strike next since you can literally go any direction that you choose.

Once you have the right grip and posture, it is time to go on the offensive! Offensive tactics are those that you will use to try to score points on your opponent. These strategies range from conservative to risky, which will allow you to tailor your skills to your preferred playing style.

The very first type of shot that you want to practice in your offensive game is the straight shot. While the name implies that you are going to be using this shot to go straight at your opponent, that is not necessarily the case. The name actually refers to how you need to hit the puck.

When watching inexperienced players, you will start to notice that they use a lot of sweeping motions that hit the puck from the side. This is a lot of wasted energy and translates into slower shots. The straight shot dictates that you hit the puck straight from the back in the direction you want it to go.

No matter if you are aiming straight for the goal or to the side for a bank shot, you should always be hitting the puck straight from that back. That way, you will have tons of power and control over where the puck goes.

As the name implies, this shot is one where you aim for the wall and attempt to bank the puck into your opponent’s net. This shot is one of the better weapons to include in your arsenal since it is really hard to follow and difficult for an opposing player to follow the puck. You just need to make sure that you hit the puck from the back in the direction that you wish it to travel. It is also a good idea to spend time practicing this move before an actual game so that you can get a better understanding of the different angles you can use to get the puck in the net-based its position on the table.

This shot is a bit trickier to handle, so you will definitely want to practice it beforehand at a lower speed. Basically, with the one-two shot, you are trying to make it look as though the puck is out of control. To do this, you aim to bank it deeply off of the corner in your opponent’s side of the table and right back to you. As it careens back towards you at high speed, you need to strike it quickly back towards your opponent’s net to, hopefully, score a goal.

With the casting cut, you need to first have possession of the puck. From there, you gently start to play it to one corner of your opponent’s side of the table. As it’s moving in this direction, you then quickly strike it towards the other, aiming to bank the puck into the goal. This shot works especially well during a lull in the action. The slower pace of the first part of the sot should lure the other player into a false sense of security that will allow for the second shot to hit pay dirt.

As the name implies, this shot is one that really gets the puck moving. It is very similar to the one-two, though it is a bit more complex. For this shot, you are aiming to bank it twice in one of your opponent’s corners, back to you, bank it twice in your corners, and then strike it towards the goal. This is definitely one that you will want to practice a bit before employing in a game. If you can master it, though, it is almost a certainty that other players won’t be able to follow it, making it easier for you to score goals.

Now that you know how to score on your opponents, it is time to check into air hockey strategies to keep the puck out of your goal. These tactics are sure to give opposing players fits, so pay close attention to become the stingiest player that you can be.

Don’t hold the mallet too close to your goal

In any type of game where there is a goal, the last thing that you want to do is get too close to it. This could make you much less maneuverable, which will limit how you have to play any shots from opposing players. It also opens you up to the possibility of accidentally hitting the puck into your own net. Nothing is more frustrating than seeing a puck sail right off your mallet and in thanks to a well-placed bank shot from the other player.

One of the ways to defend against pretty much any type of shot is the triangle strategy. This involves placing your striker in front of the net, but up a bit. You should usually be between the two dots in your own zone. This creates a triangle of protection behind your paddle that will allow you to easily deflect your opponent’s shots from getting anywhere near your net. It also gives you the flexibility you need to move to stop any type of shot from getting to your goal.

Keep track of the puck

Something else that will help you to defend properly is learning to track the puck. This means that you are following the path of the puck with your eyes but also with your paddle. When it comes into your zone, you want to move the paddle with it to blunt its momentum so that you can regain possession of the puck. This will allow you to switch from defense to offense, making it impossible for the other player to score any points.

Get yourself the right equipment

Having the right tactics is, unfortunately, only one piece of the puzzle. The second thing that you have to think about in air hockey is the type of equipment that you possess. In a game as fast-paced as this, every little bit helps, so it is a good idea to get the best tools that you can to help guarantee your victory.

If you are looking to start playing professionally or you just want to become a master, the first thing that you need to make sure you get is a good table. There are lots of different models on the market, so you need to make sure you get one that matches your playing style and maximizes your skills as a player. A smaller table is better for fast players with quick reaction times, while a larger table fits perfectly with someone that loves to use banks and strategies to put up points on other players. According to most reviews, the Gold Standard Games Home Pro Elite, designed by USAA world champions, is by far one of the most reliable and time-proven ones that will allow you to harness every trick of the trade to beat any and all-comers.

Many times when you get a new table, it will come with pucks and paddles. That doesn’t mean, however, that they are high-quality or should be counted on to help you improve your skills. Don’t be afraid to explore the market a bit. There are lots of different paddles that will allow for faster or slower play, based on what strategy you prefer as a player. You also want to make sure that you have the right pucks as well. Dynamo remains the most popular name in the industry, especially when it comes to air hockey accessories. Their pucks sets are always made of the sturdiest plastic and therefore are widely used on commercial tables.

When it comes to winning in a game of air hockey, there are a ton of different ways that you can go. You can play a defensive game by setting up the triangle and tracking the puck well to stop your opponents from scoring any goals. Or you can always try to go on the offensive and use straight shots, bank shots, or different trick shots to befuddle your foe until they fall to your skills. No matter how you decide to go about it, just make sure that you have the right table and tools to go along with the proper air hockey strategy so that you have the greatest possibility of winning as many matches as possible. Good luck, and keep practicing!

1.
Air hockey - Wikipedia
A striker (sometimes called a goalie, mallet or paddle) consists of a simple handle attached to a flat surface that will usually lie flush with the surface of the table.
en.wikipedia.org