How to Get Better at Pool? Easy Tricks to Try!

This article will help you with some solid advice from professional players on how to level up your game when it comes to pool.
By
Joseph Prunty

Joseph Prunty
Joseph works as an editor in one of the magazines dedicated to video games. Here, at RecRoomPick, he’s given the opportunity to enjoy the reverse of the medal – the no less engaging world of offline games.

Ryan Stephens
Ryan knows everything when it comes to gaming, both online and offline. Since his early years he’s been in love with arcades, air hockey, and foosball. Finally, he’s given the opportunity to share his knowledge and opinion on the hobby of his life (and even get paid for it!).

Rec Room Pick is reader-supported. We may earn a commission through products purchased using links on this page. Learn more about our process here

Games are fun, but there’s a very (very) thin line between fun and competitiveness, and most people pay little attention to that line. Hence, we find ourselves constantly in a race to get better than others at games. This isn’t a criticism of the competitive trait as I’m not one to talk; I take competitiveness in board games to a whole new level. Rather, this supports the competitive thrill in us.

Pool, like other games, becomes a competition as a result; mostly a friendly competition among peers but one nonetheless. As such, to ensure that you always come out with the tag of a winner, you need to know how to get better at pool. Now, unlike other sports and games that require physical exertion, pool is more concerned with refining a few physical things and freeing up the mental and technical parts to shine. This would mean anyone can be as good as anyone. If you are in doubt, try out our tips below.

I probably should write a disclaimer of sorts here because this is no shortcut to success in pool. This is a step-by-step list of the things you should know and do to get better. However, your ability to apply them properly and how much you practice would affect your final skill level. So, read up and practice!

You could also invest in a pool table if you are really into the game. For lovers of ping pong as well as certain other table games, there are pool table-ping pong combo sets that would help to play both games at cheaper costs.

How to choose a cue? 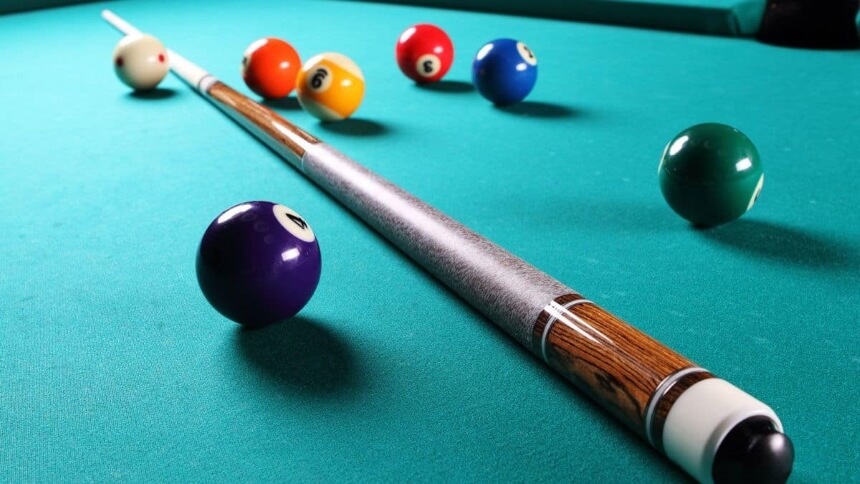 Other than the table and ball, the cue stick is probably the most important equipment in pool and, critically, it is the one you can most influence. As such, if you want to get better at this game, it isn’t advisable to go around using any cue you find.

The first consideration to selecting a cue is whether or not the tip is even. An uneven tip would affect the quality of your shots and could discourage you while staining your performance.

The best cue for you should also be of the right weight. Experience would reveal to you if you prefer heavier or lighter cues. Once know, stick to the one that works best for you. A particularly durable cue, available in many weights, is this Classic Bird’s Eye Cue from Players.

I have found that in games or sports where judges are not used, there can be little changes to conventional posture that would serve certain players better. Though there may or may not be referees (depending on how official the game is), it’s the same in pool. There are tips to holding a cue or posturing your body that would help your accuracy, and you could always tinker (only a little) with it if it helps your results. For instance, different pool players might hold their cues differently.

I have established that you would probably be bending forward to help your accuracy. To do this while staying comfortably, you need to work on your stance. For one, your feet should be shoulder length apart, with the front one facing forward and the rear one at a 45° angle. This stance guarantees that your weight would be equally distributed on both legs.

Except you are a complete beginner that is just being introduced to the game, you should have seen players use chalk around the pool table. The chalk is used to provide friction to the tip of the cue. Over time, as a cue is used, it tends to become smoother, and this could lead to it sliding off the pool ball. To prevent this, you need more friction, hence, chalking the tip.

The most popular chalks used are blue and green. They should be applied lightly, and when done, tap or shake the cue to remove loose chalk. You should chalk the tip before attempting a short.

One could also use the time taken to chalk the cue stick to composing oneself before making a shot.

Breaking is the act of taking a shot at the racked balls. Honestly, it can be an advantage or disadvantage depending on how you perform. To break right, I would advise you to use a lighter cue as this would guarantee more arm speed for your shot. The cue should be lined up straight at the central ball and keep the shot as forceful as possible. Finally, hope you bank a ball or too; there is no science to this part of the game, or, at least, I don’t think there is.

How to hit the ball?

This is one of the most technical aspects of pool because you need to make shots while keeping the white ball out of the pocket. To do this, you should have an idea of the force you need to make a shot work and the consequences of that force on where the white ball lands. Experience is the best teacher here as well. That said: one of the best ways to enhance your experience is to stay in position for a little follow-through after every shot. Rather than standing up immediately, stay down for a little while longer to monitor the path of the balls.

It would be more reasonable to practice with regulation-sized pool ball such as the Aramith Pure Phenolic Pool Balls, which are constructed to last longer.

How to understand your opponents?

This area is less about understanding your opponents than monitoring them. Yes, if you understand certain things about the temperament or mental situation of your opponent, you could distract and rile them up. Otherwise, you’re stuck with just watching them.

Some of the things you could learn from such inspections are their weaknesses/strengths. Knowledge of these could help in your shot selection. Also, ensure they are not using any naughty tricks. Learn the various faults that are possible and watch out for them.

There is an offensive and defensive aspect to selecting a shot in pool. You have to play like the person opposite you is better. Use every advantage you possess. This would include utilizing a “safety” or hanging ball when possible or necessary. This is partly because not every game would provide an obvious shot or doable suit. In such cases, go on the defensive and think in terms of your opponent’s skill set to make choices.

Offensively, the idea is to make as many shots in a row as possible. So, planning and paying attention to the angles favorable to you is just as important as making individual shots.

How to assemble the balls?

In whatever plans you are making, your opponent must be considered. While you are trying to make the best shot or shots for your game, beware of what you could be giving away to your opponent if you miss.

As such, assess the whole table and consider every ball before making your shot. This consideration should be counterbalanced by your score. Hence, pick easy, doable shots, plan two or more shots and weigh the risk of what could happen if you miss.

Assessing the situation is all well and good, but you still need to execute the shot. If you are to do this successfully, you need to close your mind out to distractions when going in for the shot. You can always engage in some ribbing and taunting, but maintain the concentration needed when the time comes to ensure you wouldn’t be the one being taunted.

Importance of being calm

As much as you want to focus on the game, avoid getting emotional or riled up by some of the shots you might see.

Playing under tension wouldn’t do you much good. To achieve this calmness, work on simple mental exercises to eliminate emotions. It might involve whispering a silent mantra, listening to some music, or counting to 100. The exercise would differ from person to person, and some wouldn’t even need them.

Everybody makes mistakes. Even the pros you look up to have mistakes they make and even those they regularly make to look out for. So, mistakes are no reason to be sad or angry. However, the really bad part is not learning from your mistakes.

To learn from your mistakes, you first have to be honest enough to admit you’ve made them. If you have a coach or mentor guiding you, it might not be that critical, but if you’re learning on your own, you need this.

The next step is figuring out why you made a mistake and determining a way of avoiding it in the future. Finally, look out for situations where you could make the same mistake to avoid making it again.

What is the cross rest?

The cross rest is a shot technique in a pool that is used to attempt otherwise undoable shots. The technique is quite effective and is easily picked up after studying. It involves placing only the thumb at the end of the cue and letting the butt of the stick rest on the table. Then using your free hand, you position the cue stick in a cross, adjust and shoot. You probably found that slightly confusing. YouTube would probably be a better teacher.

A ritual in this sense could be a procedure that guides how you approach every turn. This would be a system that takes into consideration every facet of your play as well as your opponent.

In another sense, though, it could be a series of actions that grants you more confidence, something to settle the nerves.

A simple phrase command to yourself that helps to rein in your emotions would go a long way. This is popularly used in blocking negative thoughts when games are not going our way, but they are equally as effective in helping a player ensure that their excitement doesn’t take over also. Losing concentration and taking on bad shots due to excitement or tension can be avoided by simply commanding your mind with a phrase you’ve coined.

You are probably not going to become proficient at pool simply by reading this article and learning the important stuff it contains. You can only get better by playing, practicing, and watching others.

If you want to know how to get better at pool, you need not be a genius or a hunk, and that’s the best thing about the game; it is for everyone. You are well on your way to learning if you had the patience to read up until this point.

You can watch other players online, and you can watch professionals play. This would be very informative, and being able to identify why they do what they do is an easy way to assess your progress. Keep learning, keep playing, and don’t stop.